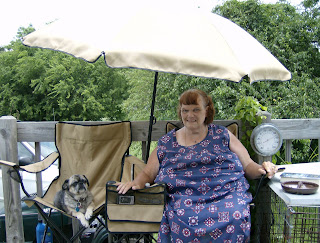 I'm still fighting with the new computer. Internet Explorer has decided to go on strike. Half the news and fun sites I visit would come up, then a few seconds later a box would pop up saying Internet Explorer can not open the site. Meanwhile I'm looking at the site but can not scroll down to read it.

Meanwhile the McAfee had disappeared again. Back to the Dell help desk. Naturally typing only worked for a few minutes and it was back to the cell phone in one hand and the mouse and keyboard in the other. It's bad enough that I'm half (or more) deaf, the help desk people are all in India. It's as bad as talking to a bunch of yankees. Hey! I'm a Texican. We talk slower down here. And we have no accent. Y'all have accents and you talk too fast. Everybody isn't from New Jersey and Boston.

So now everything is slowed to a crawl while everything we paid for is downloading, again. I did not realize that I was signing up to a new career, I thought I was just buying a computer.

So today I don't know much about what is going on in the world. I'll try to catch up when everything is finally downloaded. What happened to Algore's promise of fast internet service everywhere? Oh yeah, he's busy saving the polar bears. He's getting enough blubber to feed a polar bear family for a week, he ought to go up there.

I assume Michael Jackson is still dead. He managed to wipe Iran out of the news. And now Honduras. It sure is crowded under Obama's bus. Seems that just once, maybe by accident, he'd side with freedom. He did have the gall to claim victory in Iraq, after years of trying to achieve defeat. And he's put slow Joe in charge of getting reconciliation in Iraq. Yep, Biden. The new Sheriff in town. One would think that he had enough to do, overseeing well over three quarters of a trillion dollars in pork, er stimulus money.

I noticed that I had no picture of Linda Lou in the Karson birthday pics so here is one in her new natural habitat. She and Ming the Merciless out on the deck. Call this pic "the girls". Okay, call it the reason I'm living.
Posted by Peter at 8:38 PM