I Did Not Cry

Saddam is officially dead and I did not cry.

In new far more important, today is my grandson William's fourth birthday. We'll be going to a small party later so there will be pictures in the next few days.

Until then, happy New Year.
Posted by Peter at 12:17 AM No comments:

I took Eddie out to pee, and to fire the other barrel. To do so I had to put on my thermal underwear, my sweats, a jacket, a watch cap and a jacket and gloves. Could be worse, I could be in North Dakota or Wisconsin or some awful place where they allow snow. (Why don't the legislatures up there pass a law?)It got me to thinking about the global warming zealots (the same bunch that was convinced we were all gonna die in the new ice age) talking about how we are all gonna die because it's going to get three degrees hotter.

Here is what I don't understand, we are all going to die because the ice will melt and the seas will rise a whole foot or so. Just how much of Holland is below sea level? When did the Dutch build those dikes? Long before my time, right? Except for New Orleans, aren't the rest of us smart enough to put up some dikes? Are we not as smart as the Dutch of a couple hundred years back?

I have a lot of trouble adjusting to Algore telling us we are all going to die because it will get a few degrees warmer. We have people living everywhere from Yuma, Arizona to Anchorage, Alaska, we seem to be a pretty resilient bunch. Perhaps Algore will die over a few degrees, the rest of us will move a hundred miles north. Except, of course, in Australia. They'll go south. It warmed up at the end of the Dark Ages and our ancestors survived. I'm told that if it warms up some, the growing seasons will be longer and there will be more to eat. Of course, looking at Algore lately, maybe that is the problem. Nobody will be hurt by the heat, Algore is just worried that he'll explode.

I figure my grandchildren are pretty smart kids. If it gets too hot for them to live in Texas, Arizona and North Carolina, where they are now, they can move to Siberia and wear tank tops in January. The way the Ruskies are dying off, they might as well. There will certainly be enough room.

And another thing, in between all of us dying from the coming ice age to all of us dying from the big hot spell, were we not all supposed to die from Nuclear Winter? How's about we figure out how many nukes we'd need for a Nuclear Springtime? We could drop the first one on Tehran and just work our way down a list until we have perfect weather. One on Khartoum would stop the genocide in Darfur, a nice small one on the Aswan High Dam in Egypt would let the rest of Islam know what it means when they talk about throwing Israel into the sea.

We could start a little pool, how many nukes would it take to make for good weather and would that be enough to calm Islamic Rage Boy down a notch or three or will we have to rebuild the Napalm refineries. We can Napalm 'till there is global warming, nuke until it cools off and just repeat until the surivivors of Islam decide to play nice with the rest of the world.

There, I've solved the two big problems of the world, all from staying home today so as to not bring this cold to the grandkids. With a little luck the cold will be over by William's birthday party. If I don't get over the cold by then, somebody give me another big problem to solve.
Posted by Peter at 8:03 PM No comments:

Merry Christmas to all.
Posted by Peter at 6:13 PM No comments: 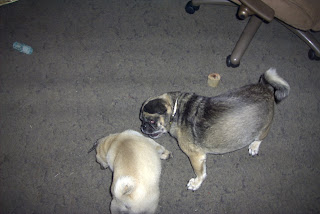 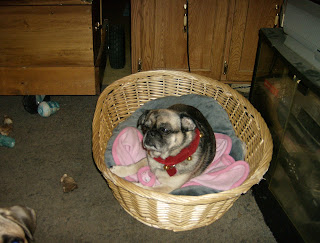 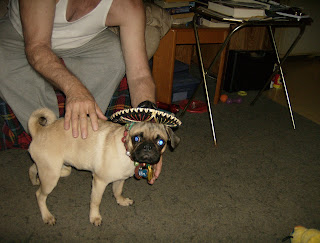 Linda Lou got herself a new camera, an itty-bitty HP Photosmart M527. We are still learning to use it but here are a couple of doggie pictures. I am still not real happy with a camera with no little window to look through, especially on moving targets like children, dogs and suchlike. Oh well, our old camera has the little window so it lives hanging from my guncart so I'm not endangering the new one at a Cowboy Action Match. Not that anyone would shoot it, but Linda Lou worries about me dropping it.

Our old camera is a Toshiba PDR-M61. As far as I can tell, photo quality is the same, although I may need new bifocals. The big difference is that we can't carry the old one around in a shirt pocket. Of course I never carry it that way and Linda Lou doesn't have very many shirts with pockets.

I suppose there is some sort of scientifical reason than these electronic cameras wait when you push the button to take the picture, usually until the dog has moved so we see nothing but the dog's butt. Or maybe the camera makers are Malthusian types and just want my blood pressure way up there.
Posted by Peter at 10:40 AM No comments:

Email ThisBlogThis!Share to TwitterShare to FacebookShare to Pinterest
Labels: Dogs

There isn't much going on down here in the Poorfarm. We had our Cowboy Action Shooting Club's Christmas dinner and get together on Saturday night. As always, Mexican Food. I will not comment about a bunch of middle-aged and older men, and their wives, in a closed room eating frijoles, we've all seen that understated masterpiece, Blazing Saddles.

We, as usual, got our share of strange looks, even in Texas people look at you funny for wearing the old-style cowboy clothers. Or maybe it was the frijoles.

It looks like I'm going to have to pay a visit to the Fabled Tequila Mines Of Cuervo. I was drinking a cherry limeade from Sonic the other day and somehow Eddie the Pug Puppy got 'hold of a lime slice. I have never seen a dog that loves lime slices before, Eddie may be the first. I tested Ming the Merciless with a lime slice, she wrinkled her nose and backed away which is more like it. Oh well, if we load him up with Margeritas we'll have a lot more peace and quiet. With my luck he'd be a fighting drunk.

Linda Lou's minivan is in the shop so we're driving a rental. A Dodge Caliber. It's okay, just another small car except to one thing. You can wear a hat inside. Most of the little moterised roller skates these day you just can't wear a real hat, there isn't room. Even the bigger cars you can't get in and out while wearing a hat. I am beminded of Walter Chrysler who, when the longer and lower craze first started said "I build cars to drive, not to p--- over."

When we bought the minivan we were also looking at a Jeep Grand Cherokee, I then drove one while the minivan was getting some kind of service, we upgraded the rental that time. I could not get in and out without taking off my hat, the roofline was too low. The new Grand Cherokee may have this fixed, the guy from the rental company was driving one for the pickup at the dealership, and, at least on the passenger side of the front, it worked for me. I didn't use to care about wearin' a hat. Right up until I didn't have enough hair left to keep my head from sunburning.

What Did They Study?

Oaky, let me get this straight. The Iraq Study Group studied Iraq by going once to the Green Zone and only Chuck Robb got out of that particular place and went to an FOB.

Meanwhile they had no testimony from a single Lance Corporal in The Corps or a Staff Sgt. in the Army, nor any Colonals running Regiments or Brigades.

After all this study they want us to involve Iran nand Syria in the solution to the problem when probably half, or more, of the fighters and weapons killing our troops come from Iran and Syria.

Did this crowd study LSD?
Posted by Peter at 9:45 PM No comments:

Email ThisBlogThis!Share to TwitterShare to FacebookShare to Pinterest
Labels: Out Of Their Minds

Britney Spears' crotch seems to be leading the news today. Linda Lou and I are a little over 120 years old, combined and we've both gone our whole lives without either of our crotches being featured on the Drudge Report or Michelle Malkin.

Of course, I don't get out much, is Britney Spears' Crotch the name of a new rock band?
Posted by Peter at 6:45 PM No comments: