Karson Has A Birthday Party 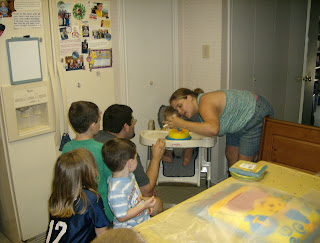 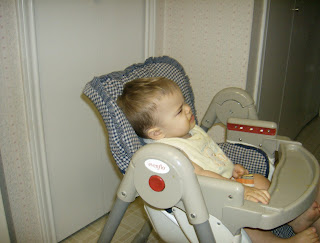 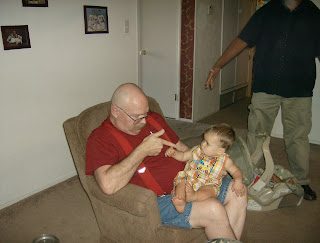 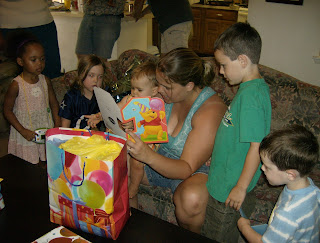 Satuday was Karson's first birthday party. Because Dean's mother had to be at work by two PM they held it at the ungodly time of ten AM. Ten AM doesn't sound so early to normal people but I worked the swing and graveyard shifts for most of my life. And we live a very long way from the northern suburbs of Dallas,

What makes it worse is that I'm part vampire, I simply do not do mornings. So I went to bed about three and a half-four hours early, at midnight. I then tossed and turned, and did not sleep I simply annoyed Bingo, who can sleep day or night. Every time he got nice and comfy I rolled around. Finally I got up at three thirty AM, relieved my now tiny bladder and got to sleep. Funny how so many of my body parts have enlarged with age but my bladder has shrunk to the size of a grape.

At any rate my disgustingly cheerful Linda Lou came in at seven AM to wake me, her being all nice and awake. It didn't hardly work until she set Bingo on me to wash my face with his little sandpaper tongue. That didn't work too well, either so he switched to cleaning out my ear. That got me up, I just wasn't ready for an all morning wet willy.

I stumbled out and got a cup of coffee. A while later I had another cup of coffee and a bowl of cereal with a banana. I never know if they are going to feed us, this time they were going to. Naturally I wasn't hungry.

Anyhow we got in the car and drove to town. And drove, and drove some more. What ever possessed us to move so far from everything? I swear, we get yesterday's teevee programs over the satellite! If we decide we'd like to shop in town by the time we get home the milk is sour, canned goods are way past their sell by date and any electronic goods are three generations obsolete.

Anyhow we got there before the kid was old enough for his learner's permit, only a half hour late. We were not there but a few minutes when Karson's Mama started opening his presents. Note to the young: One year old babies do not understand birthdays. Although birthday parties are a good way to score some new toys and clothes, as well as baby wipes and diapers, the older kids do not understand, either. Especially William. Now that boy wants to be the center of attention. He wants to be the bride at every wedding and the corpse at every funeral. (Thanks, Robert A Heinlein!)

Another thing we discovered is that the Safety Nazis have really worked over children's toys. Linda Lou remembered that kids of Karson's age just love those toy telephones, Oddly the Fisher Price toy telephone still uses a dial. To heck with the children of that age, have their parents ever seen a telephone with a dial?

That is not the important thing, though. The "cord" between the bottom of the phone and the ear-mouthpiece has shrunk. It's like six inches long, it's impossible for a baby to goo goo and shriek over the telephone to his imaginary friends without lifting the whole thing off the floor. This is not the way these things were when Karson's parents were that age. I know it's the Safety Nazis protecting the children! from being strangled. Well, now I'm sixty-two years old now and have been a news junkie my whole life. I'd like to know just how many of the children! have been killed or seriously injured by too-long "cords" on toy telephones. Names, dates and coroner's reports, please. I suspect we'd be better off killing the Safety Nazis and letting kids grow up with a little risk, the way we did.

Then it was Karson's lunchtime. He is still eating that Gerber stuff. He has switched to the stuff that is a little more textured, he's not quite sure about it. I couldn't get a good pic pf his "do not want!" face.

Then it was time for cake. Naturally they gave the birthday boy some to eat with his hands, judging from the look of things his knowledge of persactly where his mouth is is still somewhat tenuous. The other kids did their part, too. We left just as the fire Department came to hose the place down. Really, the one that got the best part of this shindig was Pele the dog. He scored two unattended hot dogs, a hamburger butt, some chips and a plethora of crumbs.

Then we drove home, wondering why we don't go see the kids more often.
Posted by Peter at 2:07 AM

Email ThisBlogThis!Share to TwitterShare to FacebookShare to Pinterest
Labels: He Has Grandbaby Pictures, Run For Your Lives