A Nation Of Strangers

Another mass shooting. These things never happened in my grandparents' day. They didn't have television or air conditioning, they had porches. They knew their neighbors and neighborhood.

Over at The Ace of Spades they tout a pair of pictures, the Tucson shooter and this nut in Colorado. The expressions on those two faces are more or less identical. It's really not that hard to notice a nutcase, and today we see them all the time. Mostly wandering the streets having loud arguments with someone nobody else can see. Most are mainly just a pain in the butt, making noise, pooping in doorways, panhandling, etc.

They would actually be better off in an institution if only we could find staff that doesn't either abuse them or ignore their needs, along with doctors that didn't believe they owned the patients for the practice of bizarre theories.

After the left tried very hard to make the Tucson shooting a right wing plot the public eventually found out that Loughner was an apolitical nut who should have been involuntarily committed if the local law enforcement had been doing the job. He would have then had to jump through more hoops to get his gun, perhaps even discouraged by the initial official refusal.

We will probably eventually read or hear about James Holmes, the accused shooter being somewhat strange. I've already read about "shy but intelligent". The simple reality is that no one just wakes up and decides to off a bunch of strangers. It takes time for such a mental state to grow. In the old days people would notice. As we saw in Tucson, people did notice but, again, law enforcement failed. In my grandparents' day he would have been hauled downtown, perhaps with a minor tuneup along the way. The second or third time he would have been committed.

We let crazies roam the streets because of their "rights". Nobody mentions the rights of the people who have to put up with them. And the Loughners and Holmses have their "rights". No one mentions the rights of the folks in that theatre. The same crowd that excoriates the Second Amendment, the NRA and the Tea Party would never allow the Holmses and the Loughners to be locked up. That would be judgemental. Somehow a lack of judgement has become a virtue. No wonder we have Joe Effin' Biden as VP.

Hodgdon's Eraser 223 And A Couple Of Shotguns

Toward the beginning of the year the Hodgdon Powder people announced, with great fanfare, a new powder geared toward the high volume semi auto rifle crowd. This powder is the right burning rate for cartridges like the .223 (5.56 NATO) and the .308 (7.62 NATO.) and suchlike cartridges. It's a little fast for my beloved .30-06.

Hodgdon's literature ballyhoos the fact that this new powder contains a secret ingredient that reduces or eliminates copper jacket fouling. This is a big deal to folks like prairie dog shooters and the military who might find it advantages to be shooting rather than cleaning.

Now the thing Hodgdon is not saying is that this revolutionary secret ingredient in the powder isn't the first use of such things. A couple of Alliant's powder have it and Ramshot's TAC has something doing the same thing, if not the same "secret ingredient". This isn't to say that such a thing is useless, just that it's not a brand new thing.

I haven't been into that type of shooting, I've been out of the service for well over forty years and I don't live in Prairie Dog country. So I corespondent with a couple of pals and got some non-advertising  words about it. One Pard claims that he has two .223s one that has a rough barrel that starts losing accuracy after only around fifteen-twenty rounds, the other with a smooth tube that keeps it's accuracy through a three hundred round shoot.  This Pard claims that the rough barrel keeps it's accuracy through a hundred round test and cleans up with only a few patches wet with Sweet's 7.62 solvent where before it was a task cleaning it after only a couple twenty round mags. He also claims that this new Hodgdon powder gets awfully small groups on a paper target.

Another Pard is a National Match shooter. He shoots the .308 and also reports good accuracy and easier cleaning.

It's important to note that this, nor any other, powder will clean copper deposits out of a barrel, the chemistry merely helps to resist causing such deposits. Start with a clean tube. In my near dotage I shoot mostly black powder  and lead alloy "boolits" and durned few smokeless rounds except from my .22s. I still have some smokeless though. Mainly for jacketed hollowpont rounds in my defensive guns. Anyhow, if you are a high volume shooting or are simply lazy, give this powder a try, me, I'm waiting for the no-leaning ingredient black powder.

The Savage Arms people have a couple of new pump shotguns out, geared toward the non wealthy. Each has a short barrel model available for those thinking about slingin' buckshot. Each model is under $300.00. The more interesting to me is the one with the bottom feed, bottom eject receiver like the old Winchester 12 or Ithaca Mod 37. After all, the fewer openings, the fewer chances for junk to get in and tie up the action. This model, with a synthetic stock and rifle-type sights has an MSRP of 270.00

The other one is a side eject gun like the Mossberg or Remington 870. With that odd pistol grip hanging down and only a bead sight it has an MSRP of $235.00. Each has several variations, including at least one switch-barrel, giving the owner a chance to switch from a bird gun to a defense gun. Anyhow, one can look at www.SavageArms.com There is a real advantage to having at least a couple knock around guns where a scratch or ding won't bring tears.
Posted by Peter at 5:55 AM 1 comment:

Stephanie and Dean's youngest, Karson had his birthday party on the fourth, we drove up and sang "Happy Birthday" and watched the pinata and opening of the presents. The kids broke a pinata, a good time was had by all. 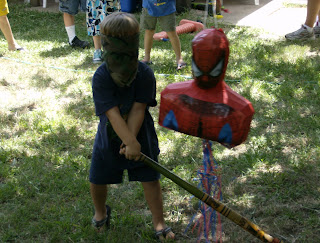 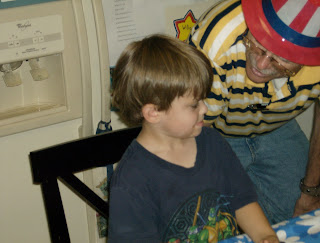 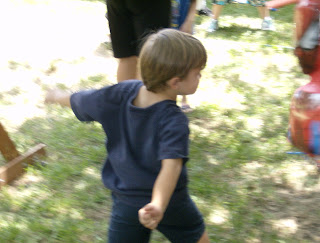 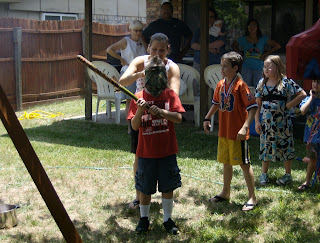 Email ThisBlogThis!Share to TwitterShare to FacebookShare to Pinterest
Labels: He Has Grandbaby Pictures, Run For Your Lives
Newer Posts Older Posts Home
Subscribe to: Posts (Atom)