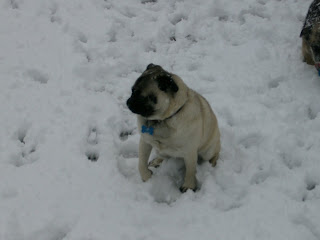 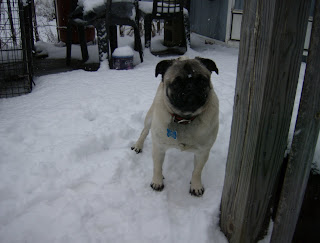 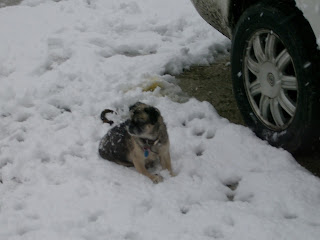 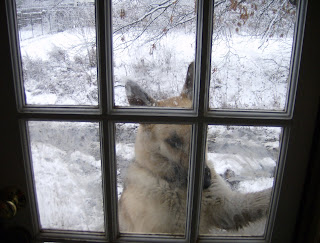 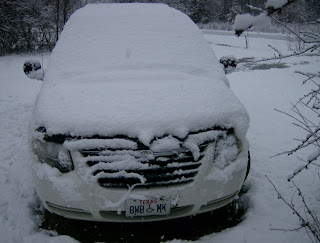 It started snowing last night sometime and hasn't stopped yet. I haven't seen snow like this down here since the '70s. This was when all the academics were screeching and waving their arms about the next ice age and how we're all gonna die!

Ever notice how all these oh so smart people can never figure on human ingenuity? None of these hothouse flowers has ever managed to, oh, I don't know, take a trip and see that people are thriving everywhere from Point Barrow Alaska to Tierra del Fuego.

The climate is changing, of course. Which direction? Um. Let's see. We had the Little Ice Age. We had the Medieval Warming Period. I would say that we are coming off a little warm period, heading toward a cooler time but then, I could be wrong. What I know for sure is that it has nothing to do with anything we are doing. Man's industry is not annoying Gaia.

We, in the wealthier west, have cleaned up the environment tremendously. I'm old enough to remember not being able to see for the smog and rivers so polluted that they caught fire. This does not happen anymore, no matter that we are a lot more crowded than we were back then. I am really sick of the idiots on the left saying that we conservatives don't care about the Earth. Anyone with eyes can see the difference between where the left held sway and where the good guys held power. Take a look at the former East Germany and the former West Germany, even today. For that matter, take a look at Detroit and then Dallas. And even Dallas has slums where, oddly, everyone votes left.

Anyhow, our Snowcopolypse down here is nothing compared to what they're still going through northeast of here, prayers would be welcomed.

I only went out to fill the bird feeder and take poor Ming the Merciless out to pee and poop. She did not like it at all. Bingo T. Pug was not quite sure at first but started running around and barking. Cochise' Apache Princess was out there running around and biting great gobs of snow and just playing.

I do not think we'll have Ming much longer, she is really having difficulty moving. Most days I have to carry her down the steps from the deck to the ground. She can still get from her little doggie bed to the food and water bowls, though. On a nice day she still enjoys laying in the grass in the front yard, barking. She may not know persactly what she's barking at, just tellin' the whole world who the yard belongs to, I reckon. Anyhow, she's still enjoying life now, with a little help.

It was a day to stay in so I decided to invent a recipe. I had a package of skinless, boneless chicken breasts and half a back of egg noodles. So I browned the breast on a griddle with some butter and boiled the noodles. The noodles went into a casserole dish with a can of mushroom soup and a can of cream of celery soup with a bit under half a can of water each.I cut the chicken up into small pieces and mixed it in, added some spices and a package of steamed broccoli and cauliflower and an eight ounce package of sharp cheddar cheese on top.

Please don't tell me someone else has a recipe exactly like this somewhere, I was just going with what I had. It could use a bit more veggies and noodles, though or maybe I just didn't give enough chicken to the dogs. Anyhow, this is now going to be an official bad weather meal for me. The only bad news is that we don't have a nice chubby girl with the hobbies of cleaning up and kinky sex. Okay, okay, I'll settle for cleaning up.

Well, now it seems that Debra Medina is the next thing to a 9/11 troofer. The only complaint I've seen about Perry, besides the fact that lefties don't like him, is that he is in favor of that HPV shot for kids. While I kind of sympathize with those against making those shots mandatory I'm not going to fight very hard against someone for trying to make sure our young women grow up cancer free.

The thing about this vaccine is that it seems to protect against a cancer that most often happens to girls that engage in too much sex, too young. My life experience is such that the ones screaming "my daughter won't need that!" the loudest have the girls that need those shots the most. Okay, not every girl but, enough. Don't get me wrong, I'm for parent's rights. I'm against cancer, though and I think that is a little louder in my head.

I'm not trying to pick a fight with Medina followers. I, unless there is a huge surprise, will vote perry in the Primary. If, by some chance, Medina gets the nomination, I'll work hard for her election. I do not think she will, nor should, get the nomination, though. Still, anybody but KBH or a Donk.

Update: The dogs all think I didn't give them enough of the chicken and that's what was wrong with the casserole.
Posted by Peter at 7:58 PM