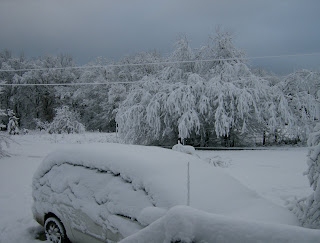 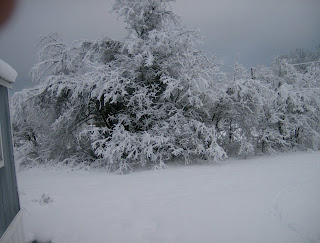 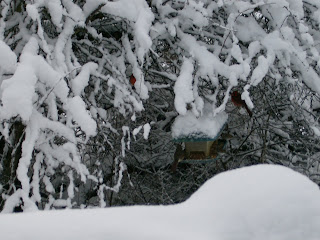 I was on my way to bed Friday morning and took some more pictures. I took a ruler out and measured the snow in a couple-three different places where it was flat, seems that it was about seven inches. Now for someplace up north like Minnesota or Maryland or Vermont* or some other dreary place that isn't Texas, seven inches of snow may not sound like much. Here, seven inches is a blizzard. Remember, folks, we get our blizzards at Dairy Queen.

To believe in man made global warming one must also believe our ancestors caused all those other climate changes. The didn't and we aren't. This whole global warming cult is simply those who have given up their belief in God and jumped on a new religion, the Church of global Warming, Pope AlgoreI. Well, it's true that Pope AlgoreI has made quite a bit, somewhere around a billion dollars selling Papal indulgences, er, sorry, carbon offsets, to people who aren't real smart. Here is a guy who flunked out of law school and then left divinity school "voluntarily" just before they threw him out for grades. There are a lot of rumors about saying that he was really majoring in marijuana.

Well, anyhow, it's supposed to warm to the 50s today so I reckon this will be gone by tomorrow nite at the latest. I hope the folks in Dallas took their kids to Flagpole Hill and let them slide down on sleds, big pieces of cardboard or trashcan lids.

Update: I neglected to put the thought about the asterisk at the "northern states like Maryland or Vermont. I know full well that Maryland is not northern.

If anyone cares, clicking on the bottom photo to embiggen it will show the Cardinals at the bird feeder. Putting birdseed into that feeder put me into snow deep enough to have it slop into my boot. Ugh. Double ugh since I wasn't going to be out there very long so I just pulled those old boots on over bare feet.

I call them "old boots" because they are sort of old, they were my new Justin Ropers that George the German Shepherd puppy chewed to doll rags. The soles are still "pert near" brand new, after George chewed them I only wear them while I'm on the riding lawn mower or out in the mud. That chewing thing was in early 2006. Shortly after I bought those boots Justin changed the design of their basic Ropers and the heels are now molded as part of the rubber soles. Meh. Plus they're made in China now. I'm still waiting for my loyal readers to send me to China so I can check out the Chinese cowboys.

I know that pretty much all the religions tell us to forgive those who have done us wrong but, even so, I'm still waiting for my chance to um, show the creep that shot George the error of his ways. I hope this won't keep me from going to Heaven.
Posted by Peter at 4:30 AM