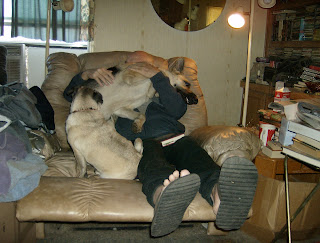 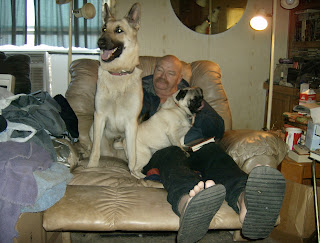 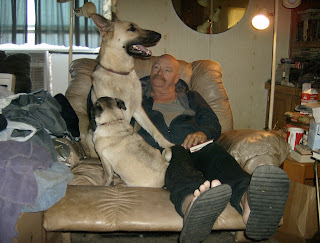 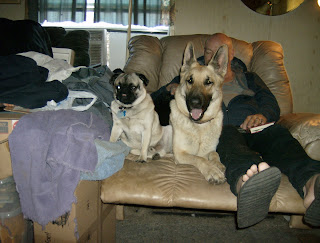 When it's real cold out the dogs stay inside a lot more. Please note, I mean real cold, Texas style, not that Yankee stuff they have where it drops below freezing in late September and doesn't thaw until sometime in mid August or something. I don't really want to know the exact dates of this sort of thing in Michigan or Minnesota, all I know is that, down here, we aren't equipped for the cold, we dress for and build for summers that start in mid April and end in early October and winters where temps often range in the mid 50s, and sometimes warmer.

This, is not really a piece on climate, though, but of dogs and birthdays. The dogs really have too much energy to stay inside all the time, although Bingo the Pug needs somewhat less exercize, being a Pug and all. Still, he is a young Pug.

They get most of their indoor exercize by fighting over whichever is the only dog toy in the entire universe. No human will ever know which of the dzens of toys we have is the only toy at a given time.

Their second favorite means of exercize is fighting the battle of who gets to be closest to Daddy. This is sometimes difficult for the bald fat guy. It is not easy to read when The Beast and The Mini Beast are having a no holds barred wrestleing match in the chair. Eventually, though, they settle down. Usually

CAP gets next to me, being bigger, sometimes she is next to me with Bingo on my lap. Then they lay there for awhile until something exciting happens like Linda Lou going into the kitchen. Since the kitchen is where all things holy, meaning treats, are kept, there is an emergency exit from the chair. Had to get dogs. Couldn't get a nice Parakeet, no, had to get dogs.

In other news, yesterday was William's seventh birthday party. A tragedy ensued when we were partway there and Linda Lou realized that she forgot the camera. Oh well, I just posted grandkid pics from Christmas so no one will die from that.

There were about eight thousand kids there, so it seems. I ended up with two little girls, foster children if it matters, glued to me for a while. Between my deafness and my shattered memory I do not know their names. I do know that both were cute as a bug. If we still used arranged marriages I could have the best looking great grandchildren in the history of the world. One was a nice looking blonde girl, I'm thinkig she would match up with one of the grandkids in North Carolina, and we'd have a tribe of viking looking kids, although blonde doesn't exactly run in the family but, what the hey. The other little girl is brunette with curly hair and somewhat Mediterranean features. Hopefully we'll get pics from the shindig E-mailed to us. Anyway, the little brunette is a tad older than Josiah but by the time they finish college that won't matter so much.

It is somewhat odd that those kids, whom I have never seen before, spent more time with me than any of the grandkids but, then, William had new toys, including a couple that Daddy had to assemble so they were spending time there.

Anyhow, it was a bit warmer and, most importantly, the north wind has died down, at least for a while. So, the kids got a little time outdoors, too. But then it was late afternoon and time to wend our way home. The dogs were glad to see us.
Posted by Peter at 5:12 PM