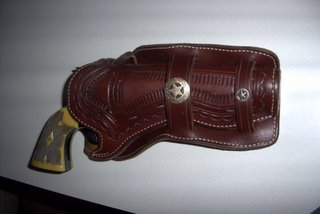 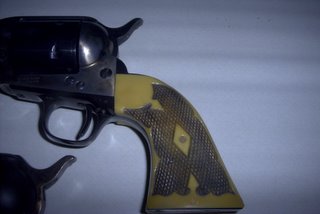 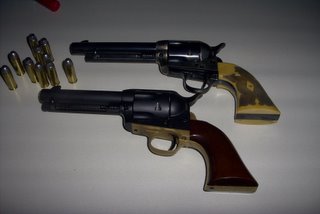 In honor of the 45th edition of the Carnival of Cordite let us discuss my favorite big bore cartridge, the .45 Colt. I am lucky enough to own three .45 Colts, two clones of the Colt Single Action Army and a stainless steel version of the Winchester Model 92 rifle, the Navy Arms clone made by the Rossi people down in Brazil.

Those interested are invited to check out my new grips on the longer barreled revolver. This set is from the Buffalo Brothers in Mesa, Arizona. The materiel is supposed to look like old ivory. I am interested in shooting the gun with the new grips and see how the checkering helps the grip. Putting these grips on was quite a little job, they are cast oversized and in three pieces. Once we sanded them down to fit we then had to glue the three pieces together to make them into one piece grips. The next set I get will be the same color but, perhaps, a different design.

Shooters and, especially handloaders should bear in mind that their are two levels of .45 ammo, the old stuff, loaded to black powder pressures and modern, loaded to much higher pressures for Ruger revolvers and Marlin and Model 92 clones. Black powder level pressures are about 14,000 PSI, the modern stuff is loaded to above 30,000 psi. Do not ever put that hot stuff into a Single Action Army or Remington clone, nor a clone of the '73 Winchester rifle or carbine. Doing so is building a grenade with an instantaneous fuse. I, having both do not load much to the higher pressures level, when I do it is always with jacketed bullets, rather than cast lead. I really want to avoid putting one, or more, of the hot loads into one of my Colt Clones.

The Smith and Wesson Model 625 double action revolver is stronger than the old Colts and new clones, but not so strong as the Rugers. Nobody bothers to load ammo specifically for the S&W. I would not try pushing a 250 grain bullet much over 1000 fps with the S&W.

Do not fall under the impression that the black powder loads are wimpy, though. It is no great trick to push a 250 grain bullet out of the muzzle of a revolver at over 900 feet per second. Until the .357 Magnum was developed the most powerful handgun cartridge made in America was the old black powder .45 Colt. A handloader can match those old ballistics with nine and a half grains of Unique behind a 250 cast or swaged lead bullet. With 12.9 grains of Alliant's Blue Dot one easily beats the old ballistics, at the old pressures, too.

Because of changes in the cartridge cases we can no longer pack 40 grains of fffg black powder behind a 250 grain lead bullet, it simply won't fit. I have managed to pack a tad over 35 grains, that is quite a load. We can almost match the old ballistics by loading 35 grains of that expensive Swiss brand powder behind the 250 grain bullets. The average one grease groove bullet will work in a revolver with good black powder lube, not so well in a rifle, there simply is not enough lube for the longer barrel. That requires one of the more heavily lubed "big lube" bullets or a grease cookie. The grease cookie takes up about three grains worth of powder room. The longer tube of the rifle will more than make up for the loss of powder. Of course we then get into the two different load thing again, too. I am saving my nickels and dimes for a "big lube boolit" mold. I would probably already have one except the guy that contracted the Lee people to make them only had them make six cavity molds instead of the less expensive two cavity type.

The shooter who has a Ruger revolver instead of the Colt or Colt clone has a revolver that will beat factory .44 Magnum loads. A handloader can 26.5 grains of Hodgdon's H110 behind a 250 grain Hornaday JHP for 1450 fps. Or try 20.2 grains of Hodgdon's Lil'Gun behind the 300 grain Speer JFP for 1200 fps a Marlin or Winchester '92 Rifle clone one can plan on a three to four hundred fps increase in velocity. Within their range limitations these ballistics will drop deer and black bear easily and more than a few elk have fallen to them, too.

When reading the gun magazines we sometimes still see the rumor of thin, weak cartridge cases in the .45 Colt. That may be true of some foreign brands of case, do not believe those rumors in modern American cases, though buy a few bags of Star Line brass and forget about weak cases.

Speaking of the .45 Colt cases, another change in them since 1873 is that the rims are a little bigger, the modern cases have rim enough to work in the lever action carbines and rifles. The shooter with very old handloading gear may need to splurge on a new shell holder.The new cartridges just barely fit in the first generation Colts.

Non handloading shooters have the full range of ammo available, provided their pockets are deep enough. There are a lot of standard pressure loads available. The shooter who wants a standard pressure round that is a good one for defensive use would be well advised to try the Federal or Remington 225 grain lead hollow point. It runs about 900 to 960 fps from a revolver. If I used one of my .45s for a primary defense gun it would be stuffed with those. If one is a fan of the .45 ACP autopistol round this is a near twin of the more effective JHP rounds. Other possibilities are the Winchester 225 grain Silvertip JHP round or the Speer 250 grain Gold Dot Hollow Point. The Speer would be my choice for a defensive round in a revolver with nonadjustable sights. The lighter bullets would shoot low in most cases.

Hunters with Ruger revolvers would be well armed with one of the loads from Buffalo Bore or Grizzly Ammunition's choices. These loads run from 260 grain bonded core JHPs at around 1350-1450 fps to those monster 325 to 335 grain lead semiwadcutter slugs at 1250 fps. Bear in mind that these rounds cost more than a dollar each. If ever there is a good reason for handloading, these rounds embody those reasons.

There is one more level of power, the loads for the custom five shot revolvers. These loads are very much like the .454 Casull and I don't quote them. Speaking of the .454 Casull, The folks that made my .45 Colt rifle teamed up with Legacy Sports and are making a clone of the '92 Winchester in .454. I would suspect that shooting one is like shooting standard .45-70 loads in a very light carbine. I have loaded some fairly hot .45 ammo and set it off in my rifle and that crescent butt plate backs right up. Fortunately the Legacy has a more modern flat butt plate, with the old-time crescent butt plate one would have to examine his teeth carefully after shooting. The crescent butt plate would knock my fillings out. I am not interested in buying that new rifle though eventually I am sure I shall shoot one. Someone in one of my clubs will buy one. I shall give a review when I shoot it. The only other differences are that the magazine tube is a little different and that they have those newfangled fire sights, the sights holding those colored plastic inserts that gather light. The fancy name for these is fiber optic. Since these sights are verboten in cowboy action shooting I ignore them. I would put a Marble's tang sight on this.
Posted by Peter at 1:00 PM